Published on 2019-08-30 by Eric Bourdon | Comments Off on Portrait of Eric Braeden (fragment) by painter Eric Bourdon
Category(ies) : Painting, Portraits 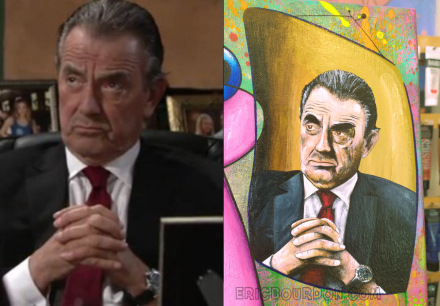 Zoom on the portraits

It is a fragment of a recent painting on canvas :
Old classical art in a contemporary gallery

Hans-Jörg Gudegast, aka Eric Braeden, born in Germany in 1941, is a naturalized American actor. He became world famous thanks to the soap opera The Young and the Restless, in which he plays since 1980 the role of self-made business magnate Victor Newman.

Eric Braeden is also known for his roles in movies such as Titanic by James Cameron, where he plays John Jacob Astor IV, or Dr. Charles Forbin, a disturbing computer scientist in Colossus : The Forbin Project (1970), and also Dr. Otto Hasslein in Escape from the Planet of the Apes (1971).

On TV, he played Captain Hans Dietrich in the 1960s TV series The Rat Patrol.

He is one of the very few soap-opera stars to have (since 2007) his star on Hollywood’s famous Walk of Fame. Today, Eric Braeden is recognized by the world of cinema and television, to the point of being compared to actors from the Actors Studio such as Marlon Brando, Robert de Niro and Al Pacino.