‘The hidden side of the nude’ with painter Eric Bourdon

The hidden side of the nude - Body painting with Eric Bourdon on the website Eric Bourdon, French artist painter | Gallery, in the category Paintings. A photo exhibition of full body painting at Esupcom in Lille (2008). "The hidden face of the nude", the expo that reveals hidden nudity. Photos of Eric Bourdon with Laetitia by photographer Rousdine. Bodypainting, an unusual way to paint the nude : to paint the human body without representing it. With the help of photography, painting frees itself from its representative function.

THE HIDDEN SIDE OF THE NUDE

The exhibition of photographs by Dorine Roussel (Rousdine) with models Laetitia, and Eric Bourdon, from 16 to 23 May 2008 at Esupcom (Higher School of Communication) in Lille, was the culmination of two photo shoots of body painting, performed in 2007 and 2008.

By direct application of paint on the body, bodypainting allows the painting of the human body to be released of the process or performance of copying the model, related to the traditional painting style (before the advent of photography). Seizing the body itself, the bodypainting reveals on the skin the expressive and archaic power of Painting.

Body painting photography solves the specific disadvantage of body painting : its ephemeral nature. It keeps in memory a specifically painterly work that would otherwise fall into oblivion once produced. And it supports everything that falls within the exercise of representation of the body, through its specifically photographic work. 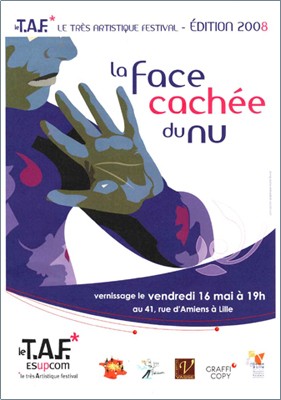 The human body is undoubtedly the most interesting topic in classical painting, the greatest source of visual creativity, more than any landscape, animal, or plant. Through the bodypainting, it is the most expressive portrait possible of the reality that is painted, the real at its best. And if the point is not to copy or imitate reality, but to paint it on the skin (leaving the representational work to photography), we also have a work that, although still focused on the real, is purely painterly. 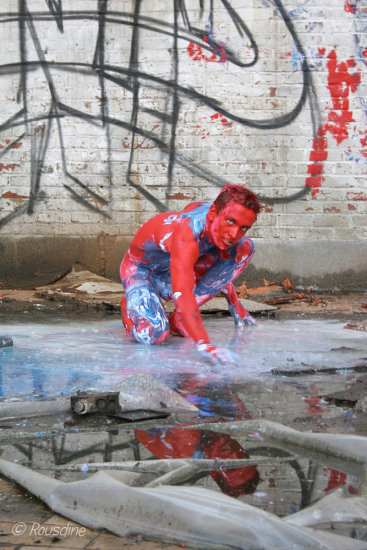 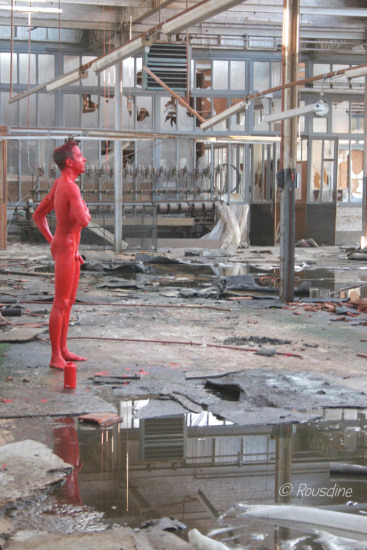 Part of the exhibited photos came from the first session of bodypainting in 2007.

in an environment. The use of acrylic paint (Louvre brand) and precisely this blood red

that contrasts sharply with a very bright white and blue, allows the body ('corps')

to communicate with the chaotic and stripped 'de-cor' of a disused factory in Belgium. 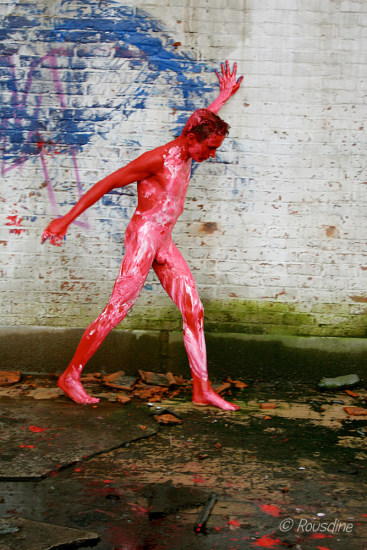 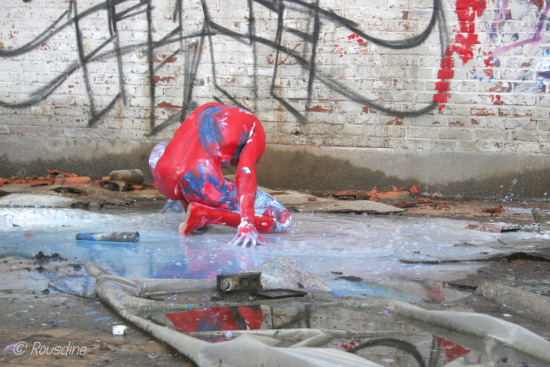 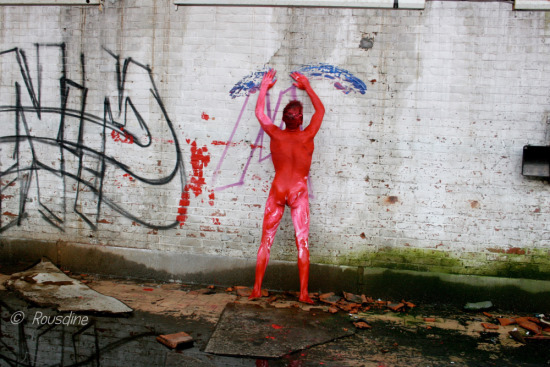 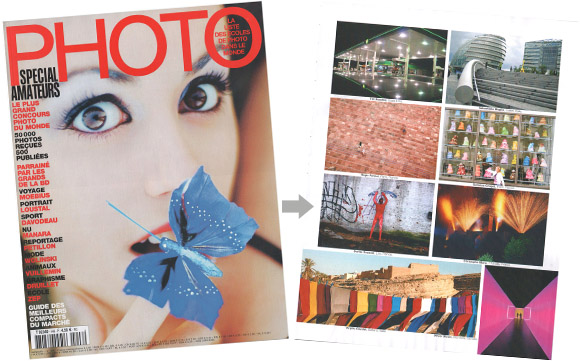 The second body painting session, in the same factory but a year later,

was performed in a duo with model Laetitia. 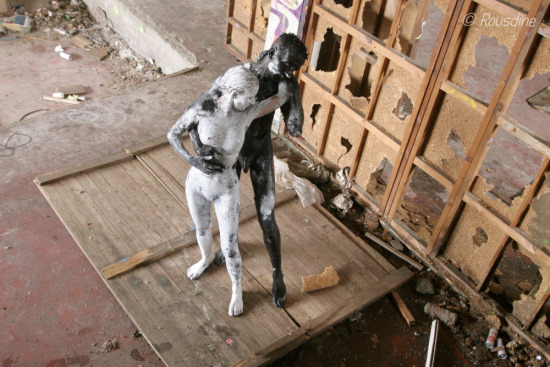 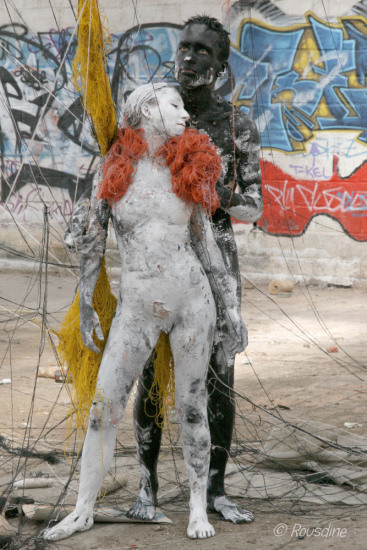 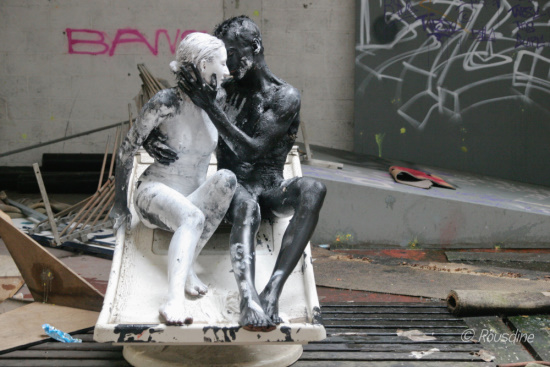 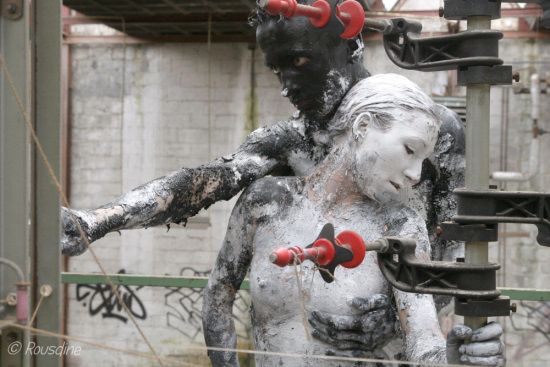 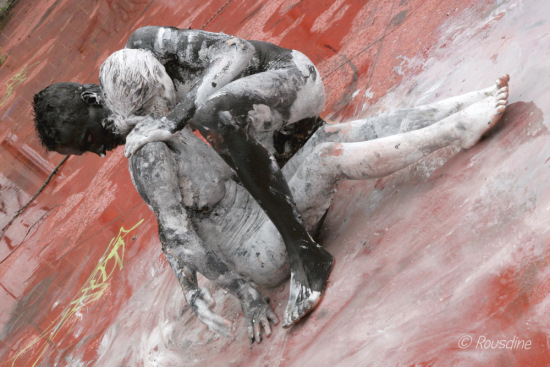 Esupcom (Higher School of Communication) organized in Lille an exhibition entitled "The hidden side of the nude" which brought together several artists from 16 to 23 May 2008, as part of its 'TAF' ('Very Artistic Festival'). The "hidden side of the nude" has several possible interpretations, but it was mainly referring to non-standard ways to explore the theme of the nude, and to "expose" even more the nude, to make it more expressive and advanced than the "ordinary nude"...

In the case of the photographs by Dorine Roussel, the nude was also misleading because hidden by paint. Then again photo meets painting, where there has never been any real nude, only layers of paint... The whole is a work of meeting and communication both between body and decor, and between painting and photography. 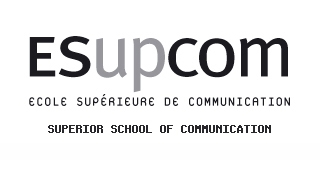 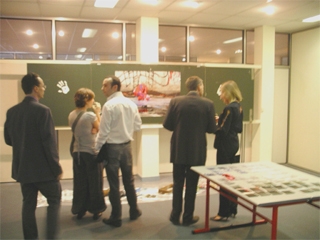 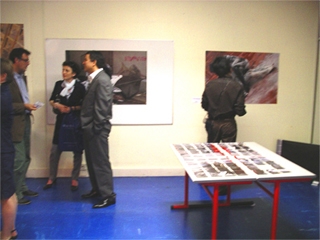 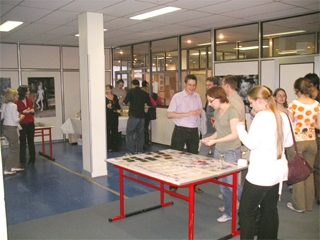 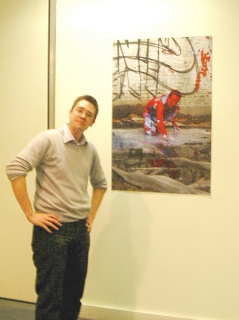 (an essential ingredient for any successful exhibition : the amazed visitor!) 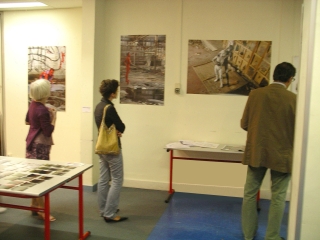 The invitation card of Esupcom for the second edition of 'T.A.F.' - Very Artistic Festival

" At a time when everybody demands transparency,

ESUPCOM reveals to you the hidden side of the nude.

and installations by visual artists invite you