Manifesto of the Official Dumb Art by Eric Bourdon

The Dumb Art work is not designed by the mind before being realized, and it doesn't take on any rational meaning during or at the end of its elaboration.

Dumb Art does not realize any project external to itself. 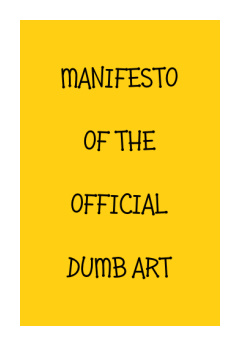 Dumb Art is the art of a mature age, free from all alienation.

It is in the service of nothing. It is what it is. It has no "meaning", no (understandable) title, no social claim or political objective. We can not say of it that it is "useful for something", it does not try to justify itself, it is what it is, it is there, as it is, it is, that's all.

This manifesto is not intended to explain or justify Dumb Art.

Dumb Art is not the enemy of reason, but it is art, and not reason.

The real enemies of reason are those who want to give it a role that does not correspond to it. We have made too much room for reason, we have expected it to direct everything, to command any creative activity, and to evaluate its results. We have wanted to make it at the same time the supreme commander, the interpreter and the judge of all activity and creation.

Dumb Art makes room for reason, even in art.

Reason is a tool, wonderfully valuable if it is used by little light touches, here and there, parsimoniously. The dumb painter, for example, can think while realizing his work, just as he can listen to a piece of music. But his creation is not a work of reason, any more than a musical work. By giving too much space to a tool, too much space to technique, intellectual faculties, thought, we have forgotten the one who uses the tools. Technique ended up controlling the being, instead of serving it. The tail ended up wagging the dog, instead of the dog wagging his tail. Well used, reason does not need more than 5% of the space it usually occupies in the art of today. Reason that knows its place is like a dog who knows his place : it is a happy reason. 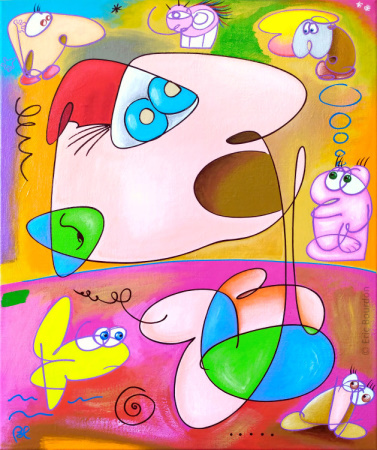 Dumb Art does not realize a political project.

But the hypertrophy of reason and thought infecting all levels of society, and making us lose sight of the essential (ourselves), Dumb Art can inspire by its better relationship with reason a lot of other movements, in all areas, including politics. We have been contaminated for centuries by the hypergrowth of the status of thought, to the point of estimating ourselves alive in proportion to our ability to think : "I think so I am"... This place that reason has increasingly taken up in society has been accompanied by a growing dehumanization, the unbridled search for what we believe to be our "interests", a mad rush for growth, profit, possession, an increased sense of anxiety and permanent insecurity, the destruction of our relationship to life forms that are of no use to us and the total enslavement of all other forms of life, as well as the pure and simple annihilation of the ecological system in which we live ourselves. This reason, which was supposed to be one of our main allies, we've made it a weapon of mass destruction of life, literally and figuratively. In all fields, we have to find back a direct relationship with ourselves, with who we are beyond thought. And also to discover who we are without thought, that without thought we still are, and that we are perhaps even more so. That we can use thought, but that thought does not define us.

In politics, for example, one could imagine (nothing related to art) a new party called the Lib Dumb Party. The Lib Dumb Party would start its meetings without debating. For a long time, almost a moment of eternity, all its members could, together, stop thinking, and realize that they still exist, and more than ever, until they laugh from happiness !

Once this is established, any debate whatsoever would be only a thousand times more productive (in a good way). One would ask only the good questions and one would thus avoid the 95% of really useless debates, the quarrels of identity, power and ego. Debates within the Lib Dumb Party would obviously not look anything like the debates in today's society...

Of course, many works of Dumb Art already exist, and since a long time. The official Dumb Art has historical predecessors, notably Outsider Art and Art Singulier, which designated the art of the crazy, of the people devoid of artistic culture, and that of marginalized of all kinds : prisoners, recluses, mystics, anarchists or revolted. Essential also is the old notion of "Art for Art" that values autonomous and proudly useless art. And how not to evoke this art that the Nazis described as "degenerate" ?... In 1937, the great "degenerate art exhibition" organized by Joseph Goebbels in Munich to try to humiliate the exhibited artists (including a number of mentally ill people) went so popular that the minister of propaganda decided to close it. The "degenerate art" (decolonized, in fact) was art that was not in phase with the defense of the "heroic", psychological and political values of Nazism. In 2007, the German cardinal Joachim Meisner took up again this expression of "degenerate" art about art "that separates itself from religion"... Dumb Art is not at the service of any ideology, whether political, cultural, religious, moral, that would aim at making it a tool for propaganda, advertising. The mere fact that Dumb Art stands up boldly is by itself an incredible force in fighting totalitarianism on the extreme right as well as on the extreme left.

Dumb Art already exists but it has never been fully outspoken.

Many are the closet dumb artists. Some are unwitting ones, they have never thought about it and that's very fine. Others try to justify themselves and fall back very quickly into the traps of reason. Some dumb artists would gladly hold themselves as dumb artists, if they didn't have around them very serious people who did not support their artistic freedom and constantly demanded they justify their creation from a rational point of view and according to various criteria of cultural interest and social utility. Other artists are perfect dumb artists but in denial, and are themselves terribly serious. They justify meaningless works with highly elaborate intellectual discourses by which they want to make themselves interesting. These are generally very pretentious and do not hesitate to violently lash out at Dumb Art they see in their fellow artists, even if this art is much less dumb than theirs ! Finally, some dumb artists have no major obstacle to overcome, but they simply do not dare to be dumb artists. They are shameful dumbs... The promotion of the official Dumb Art around the world will bring all the dumb artists out  from the shadows, and will illuminate the universe with the light and colors of the free and useless art.

Dumb Art, made by Dumbs, for a Dumb generation !