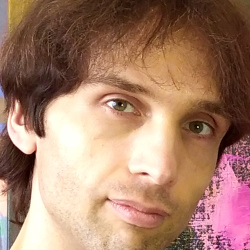 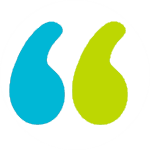 His universe is merry and fanciful, the stroke, spontaneous, has a great time on the canvas, virtuoso of the line, curves and arabesques, until the bright and luminous colours burst onto the scene and repossess it.

Eric Bourdon bends kind monsters into shape who glide gracefully among a faun of individuals whose silhouettes are of the most amazing, plump or lanky, always infinitely sympathetic and delighted to come to stimulate our dormant child souls. 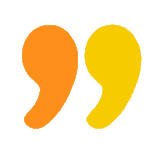 Extract from the article by Samantha Deman,

> Also, on the Gallery of Eric Bourdon, artist painter…

Eric Bourdon is a man with no story to tell, and a sketch artist without technique.

Every day (like every painting) is a new beginning ! For him, improvisation is the only rule of the game, it is at the heart of artistic activity.

Bringing out colorful emotions and folkloric characters from a few lines drawn “without thinking”, is to cultivate graphic creativity at its most basic level.

Scribbler by profession, Eric Bourdon only tries to shed light on the creative wealth of chance and accident, and to reveal their inexhaustible potential when it comes to creating a myriad of creatures… that we would have never thought of !

Extract from the catalog of the exhibition

> Also, on the Gallery of Eric Bourdon, artist painter… 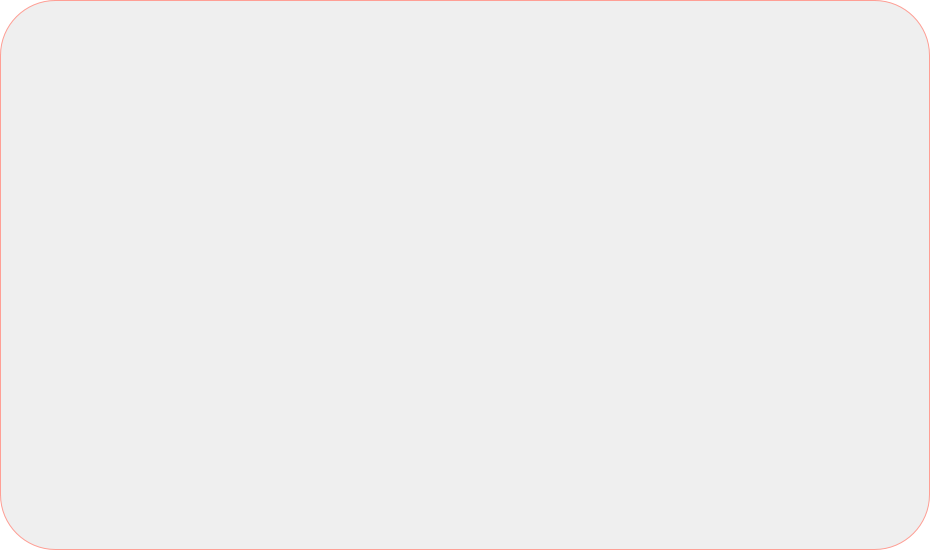 The gallery of French contemporary artist painter Eric Bourdon is almost more drawing than painting. It is a game with lines, first drawn in a spontaneous manner, random, much like a child doodling, made with chalk or acrylic paint. The lines are then worked, and reworked again and again, until something new, a precise figure, a character, emerges from this chaos. Each time, a new meaning comes to life from the nothingness. Using a few improvised strokes, self-taught artist Eric Bourdon shapes all new and fascinating characters in a pop style, symbolic and full of joy, emotions and colors. A pictorial work that appeals both to adults and younger, with these comic drawings and very bright acrylic colors, creations of which we see a selection on the website of the artist painter from Lille, in France.

It is around Lille, the Capital of Flanders, that the French painter happens to host improvisational drawing workshops, mostly in primary schools. In Roubaix, Lesquin, Villeneuve d’Ascq, Eric Bourdon has visited schools to carry out various types of visual art projects.

These courses in drawing and painting aim to creatively develop the ability (called 'pareidolia') human beings have, at an early stage, to identify faces, silhouettes, and shapes in a fuzzy visual content : partial darkness, clouds, the cream of a cappuccino, an old discolored wallpaper, an abstract painting... But this also allows Eric Bourdon to initially introduce the pupils to some of the 'great painters' (via their works) of modern and contemporary art. Wassily Kandinsky, to play with geometric figures, Henri Matisse, to juggle with forms, the contemporary painter Sean Scully, to evoke the primary colors and have fun creating contrasts... Not to mention certain artists such as Jean Dubuffet, who gave Art Brut (Outsider Art) its name, or the visual artist Victor Vasarely, father of Optical Art (Op Art)...

After having walked along in the footsteps of art history and reviewing it in a playful way, the children can then create their entirely personal works, painting with watercolors (gouache primarily). They will also collectively paint a picture on canvas, wood or cardboard, and prepare their first exhibition. For this, Eric Bourdon presents to the budding young artists two Spanish painters who have a direct link with his way of drawing in improvisation : Joan Miró, especially, but also Pablo Picasso (the Picasso of the video 'The Mystery of Picasso', a documentary created during his lifetime by Henri-Georges Clouzot, who films him in the process of drawing live ; and his masterpiece Guernica presented at the Universal Exhibition of Paris in 1937).

Picasso seemed to improvise his drawings from the beginning, while generally bringing them swiftly back to the few real and well known figures that captivated him, or even obsessed him : Woman / Horse / Bull (while in primary school, these first improvised drawings can easily finish as a : Dragon / Car / Princess...). But Joan Miró had a more expansive and less specific 'surrealist' graphic universe, which allowed him to improvise figures or symbols that 'spoke' to the viewer, without, however, us being able to describe what exactly these mysterious faces and characters wanted to tell us, what planet they came from, or what they were supposed to represent...

A large number of paintings born in improvisation under Miró’s brush were endowed with a great power of expression, without even representing anything at all ! And for Eric Bourdon, that’s the whole game of improvisation : to start drawing, painting, with a creative freedom and an open 'field of possibilities', but without falling back too fast, en route, on the repertoire of known and recurring figures that close the game, on the reference points that reassure but limit the possibilities and cut short the adventure of the imagination...

QUOTES ON PAINTERS AND MODERN ART !…

If you hear a voice within you say ‘you cannot paint’, then by all means paint, and that voice will be silenced.

I never know what I’m going to put on the canvas. The canvas paints itself. I’m just the middleman. 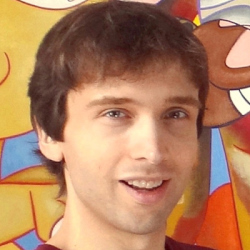 Step by step : the creation of an artwork by Eric Bourdon

Art on bodies : photos and exhibit of bodypainting

PHOTO ALBUMS OF THE EXHIBITIONS

Photo album of artistic events with the painter #1

Photo album of exhibits by the Lille painter #2

Selected exhibitions of the French painter

Catalogs of the exhibitions-sales of Eric Bourdon

ERIC BOURDON : ABOUT THE ARTIST… 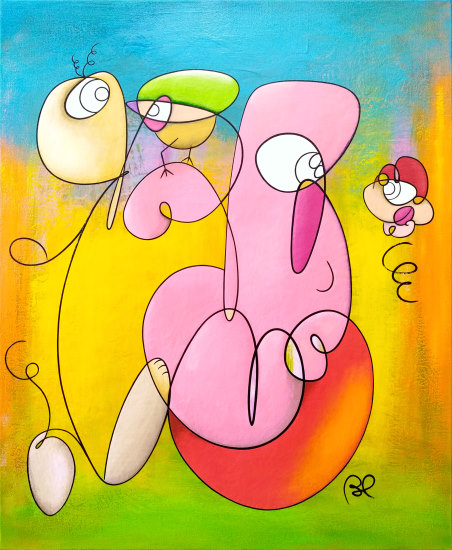 Siege of Bayonne by the army of the Marquess of Wellington. 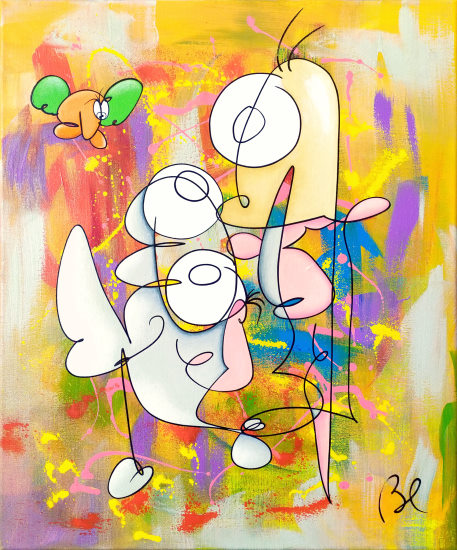 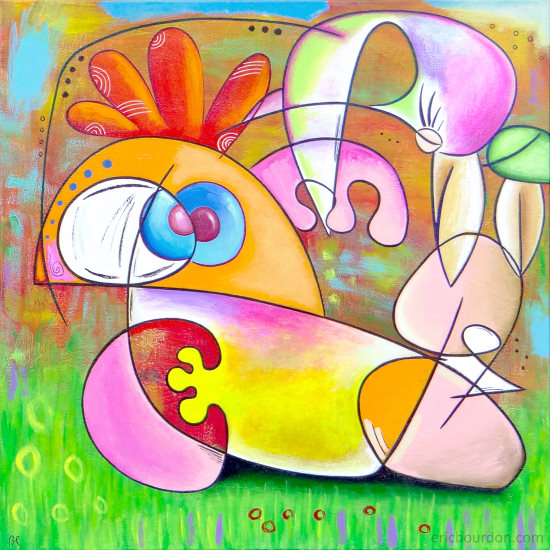 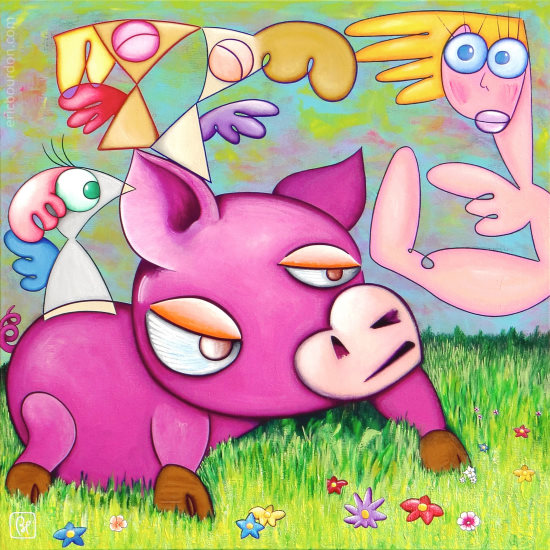 Love falling from the sky 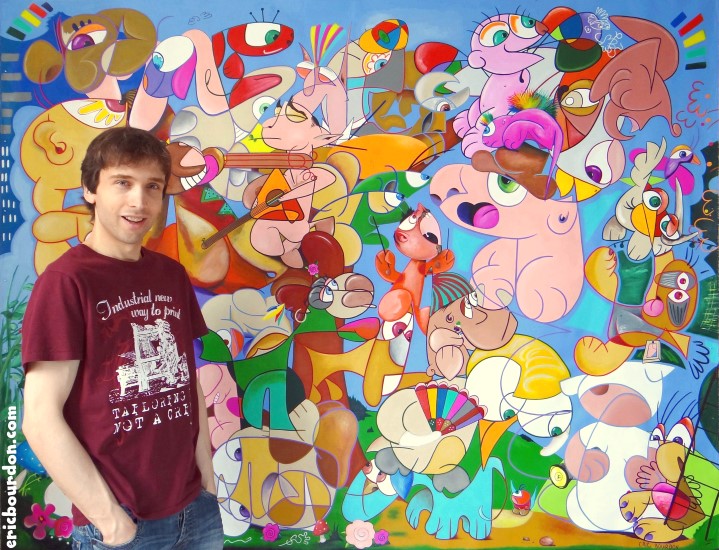 Looking for the new psychedelic superstar  or Eric Bourdon & The Animals  !