The Kiss by Auguste Rodin 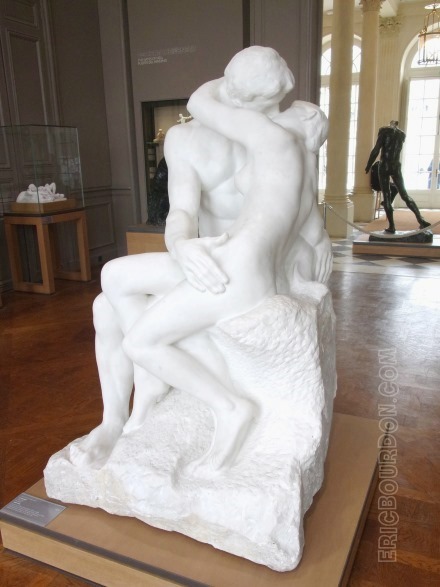 The Kiss is a sculpture of an entwined couple, of which Auguste Rodin created as early as 1882 small versions in plaster, terracotta and bronze.

In 1888, the French government commissioned Rodin to realize the first large marble version of The Kiss, for the 1889 Paris Universal Exhibition. But Rodin will take almost ten years to deliver it.

This marble version appears for the first time at the Paris Salon (former name of the Salon of French Artists) in 1898. It is currently on display at the Musée Rodin in Paris.

What many people don’t know is that Rodin’s The Kiss, like a lot of the Rodin Museum’s works, was not sculpted by Rodin…

Auguste Rodin, not being able to carve the marble by himself, employed assistants who realized, from the clay model he had created, one or more plaster versions on different scales. The Kiss was made in plaster, scale 1 (version of the Rodin Museum in Meudon, on which we can see the crosses and benchmarks made by the technicians). These assistants then carved and polished the marble block. The famous marble version of The Kiss was sculpted by Jean Turcan and other assistants.

Auguste Rodin, born in 1840 in Paris and died in 1917 in Meudon, is one of the most important French sculptors of the second half of the 19th century. He is considered one of the fathers of modern sculpture. Heir to centuries of humanism, Rodin’s realistic art is a culmination, a cross between Romanticism and Impressionism where sculpture is shaped by the struggle between form and light.