The Desperate Man by Gustave Courbet 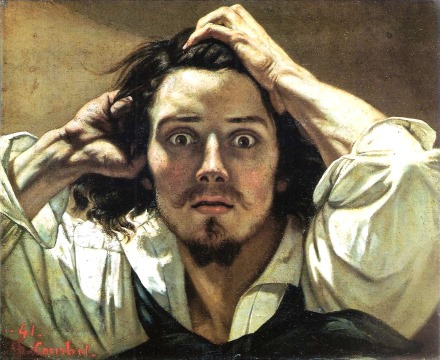 (Zoom on the self-portrait by Courbet)

The Desperate Man is a painting by the French painter Gustave Courbet. The artwork is a self-portrait of the artist. It is thought that he made this painting between 1843 and 1845, at the beginning of his installation in Paris. It shows him “desperate” but especially in full youth.

Courbet was very attached to this canvas since he took it with him into exile in Switzerland in 1873. A few years later, Dr. Paul Collin at the bedside of Courbet during his last days, describes the painter’s studio and, more particularly, “a painting representing Courbet with a desperate expression and that he had entitled Despair for this reason”.

The painting belongs to a private investment collection, but was exhibited at the Musée d’Orsay in 2007.

Gustave Courbet, born in 1819 in Ornans in the Doubs, and died in 1877 in La Tour-de-Peilz, Switzerland, is a French painter and sculptor, leader of the Realism movement. He exhibited regularly at the Salon of French Artists, called at the time Salon of painting and sculpture or simply Le Salon.

Author of a large number of paintings – more than a thousand works – Courbet is one of the most powerful and complex artists of the nineteenth century. As early as 1848-1849, his paintings challenge academic conventions, idealism, and romantic excesses. Transgressing the hierarchy of genres, he causes scandal among his contemporaries, and the attraction of some private collectors, disrupting the boundaries of art.

Supported by some critics, such as Charles Baudelaire and Jules-Antoine Castagnary, his work, which can not be reduced to the episode of pictorial realism, contains the seed of most of the modernist currents at the end of his century.