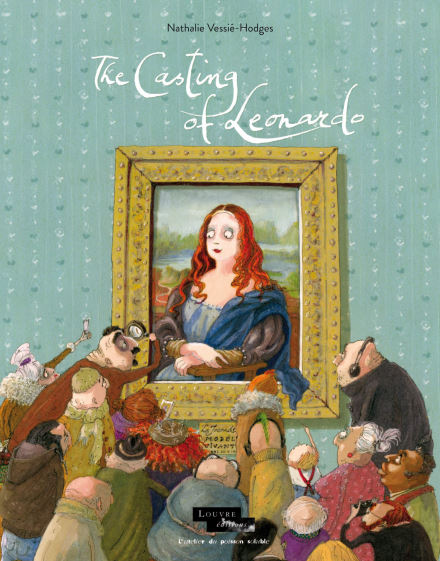 “The Casting of Leonardo”, the latest illustration book by Belgian sketch artist Nathalie Vessié-Hodges, will be released very soon, on August 21st ! As you will have understood, it is obviously about the Florentine painter and inventor, there aren’t a thousand Leonardo… On the other hand, if you thought the model who inspired his masterpiece “La Gioconda” had no competition, you’re going to discover a beautiful, little-known episode in art history !…

In a radically different style from the Belgian comic series “Léonard” (Turk & De Groot), but with the same concern for pinpoint historical accuracy, Nathalie Vessié-Hodges offers her own humorous look at Leonardo da Vinci. She traces, with a gallery of portraits of the unfortunate candidates, the terrible casting that finally gave Lisa del Giocondo (born Lisa Gherardini) the eternal role of “La Gioconda” or “The Jovial One”. A title that by itself invites derision…

Zoom on the presentation by the publisher (in French)

🏆🌿 The casting of the universal Art icon

The portrait of Mona Lisa (or Monna Lisa), second smiling portrait in the history of Western painting (but first “successful” smiling portrait for some), has been copied or caricatured many times. Since its creation at the beginning of the 16th century, copies of non or badly identified authors have accumulated, until the modern era when Jean-Baptiste Corot, Robert Delaunay or Fernand Léger made their own variations. It has become the absolute icon of painting itself. Even those who couldn’t care less about art know this too much known portrait.

Dadaists and surrealists, to protest against “established art”, hijack Leonardo da Vinci’s picture. Mona Lisa is adorned with a mustache by Marcel Duchamp, and Salvador Dalí goes so far as to steal her place by means of a photomontage. Fernando Botero paints a “Monalisa” (1978) inflated with helium (before her diet?). Artists such as Andy Warhol, Jean-Michel Basquiat and Robert Rauschenberg also appropriate this icon, through darker, more pessimistic versions. More recently, the street artist Banksy spray paints a “Mona Lisa with an AK 47″… In addition to the symbol of art, it also becomes a mirror for all the identity crisis of current society.

😜 The big “bloopers” from the casting of Leonardo…

But let’s go back to the illustrations of Nathalie Vessié-Hodges, who tell “the story before the story”. For the mysterious effects produced by La Gioconda on society are only the pale reflection of the process of her own creation, back in the golden age of the Renaissance. These are all the questions of Leonardo da Vinci during his more or less organized casting, which are reflected in his work and spread to the contemporary era.

For the very first time, “The Casting of Leonardo” opens a window on the true moods that accompanied the selection of the most famous face in art. A gallery of “everything you have missed”… Because who says selection says elimination, and the ball of the rejected is much funnier to see than the small serious picture of The Chosen One, varnished, framed and hidden behind its bullet-proof glass… 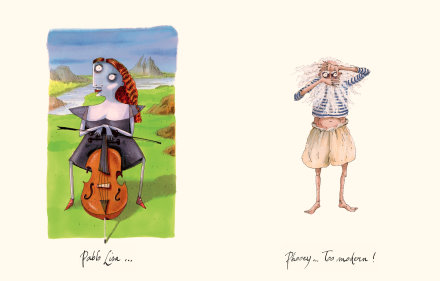 Not only funnier, but full of various graphic references, and also less mysterious, easier to understand. As in any casting, you can rack your brains over trying to explain why the winner won, everyone has his own explanation (of which he is not himself very sure)… But everybody can agree very quickly on why the loser lost !

Accessible to adults and children, the true history of art, the most amusing, the richest, the most creative, the most authentic, the one you will not find in museums… this story is here, on these pages illustrated with markers that offer delicate nuances of watercolor. What museum in the world shows you the paintings that have not been painted, yet much more numerous than those who won their place on the official exhibition walls ?

👥 The publisher(s) of the Casting

“The Casting of Leonardo”, edited by “L’Atelier du Poisson Soluble” is however published in co-edition with the Louvre Museum, as part of the exceptional retrospective organized on the occasion of the 500th anniversary of the death of Leonardo da Vinci.

“L’Atelier du Poisson Soluble” is a publishing house based in Le Puy-en-Velay, France, that mainly publishes books for youth. They defend a certain idea of the freedom of creation by supporting atypical projects, with a graphic originality, staggering stories and rarely discussed topics. Their comics albums offer different levels of reading, thus addressing both children and adults.

“Soluble fish” is the title of a sophisticated poetic novel written by André Breton. It is one of the very first works (1924) of the Surrealist movement…

Find “The Workshop of the Soluble Fish”
on www.poissonsoluble.com !

The book is to be released on August 21. You can then buy it for 14 euros. But if you want to anticipate the stock-out threatening any small publisher victim of its success (and also make sure you have a first edition collector’s copy!) you can already pre-order the book, in some stores or online at the following sites :