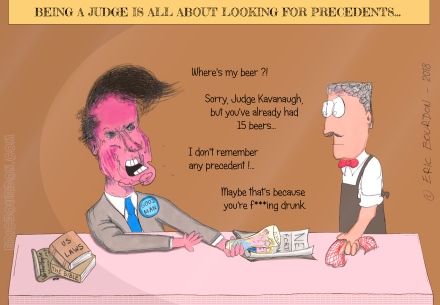 An illustration with Brett Kavanaugh, Donald Trump’s pick for US Supreme Court, a highly conservative judge (described by The New York Times as a “conservative stalwart”) obsessed with judicial precedents, but having a very fuzzy memory of his own past…

Facing multiple allegations of sexual misconduct, Kavanaugh has been mainly accused by Christine Blasey Ford of an attempted rape in 1982, that she recounted in details during her public testimony at the senate hearing last September. Kavanaugh denied having any memory of the assault. He also denied any excessive drinking habits at the time, while many witnesses describe him as “notably heavy drinker (…) aggressive and belligerent when he was very drunk”.

However, not a single Republican senator opposed Kavanaugh’s confirmation, even after the judge’s hysterical behaviour during the hearing about the alleged assault, his infuriated attacks and his lunatic allegations of a far-left conspiracy “on behalf of the Clintons”.

It not only sends a clear message to the victims of sexual assault : the entire Republican Party, drunk on power, may well find you “very credible”, it doesn’t care about you anyway. All it wants is its nominee confirmed quickly (before the elections).

But the confirmation of Brett Kavanaugh to the Supreme Court, which is supposed to hover beyond all suspicion, to be impartial in its judgments and to stay away from any political conflict, simply doesn’t have any precedent.

Because with respect to the criteria of personal integrity, temperament, and impartiality, Brett Kavanaugh’s final hearing was a carnage never seen before. The US Supreme Court, which deals with the most fundamental legal issues and was still, one month ago, the very last bastion of trust in institutions, has suddenly become more conflictual and politicized than any other one… Untrustable.

You may want to read this article from The Atlantic :
“Trust Is Collapsing in America”