Eric Bourdon - Blog
» Read a Nazi philosopher with no reference to Nazism ?

Read a Nazi philosopher with no reference to Nazism ? 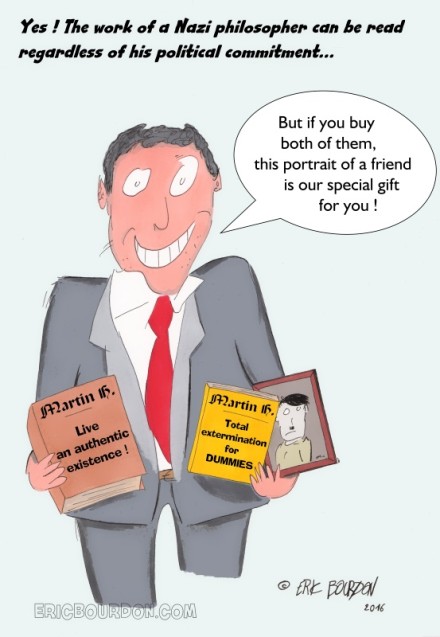 Read Heidegger with no reference to Nazism ?

Pen and marker drawing on paper,
with digital retouching
by Eric Bourdon © 2016

It’s a most common question, especially since it was discovered that Martin Heidegger, the ‘philosopher of authenticity’ was not only personally involved in Nazism, but his so-called ‘philosophy’ was essentially an intellectual (and highly sophisticated) phrasing of the Nazi ideology. The publication of his courses and lectures, writings in their original form, private letters and public statements, and a huge number of texts he wanted to be published only after his death, make this issue increasingly important.

See this book by Emmanuel Faye :
The Introduction of Nazism into Philosophy
in Light of the Unpublished Seminars of 1933-1935
,
from Yale University Press, 2009.

Named 2009 INDIES Winner
in the Philosophy category, by Foreword Magazine.

➯ See also : Heidegger : the introduction of Nazism into philosophy