In Athens, the ruins of the State and market could reveal true art… 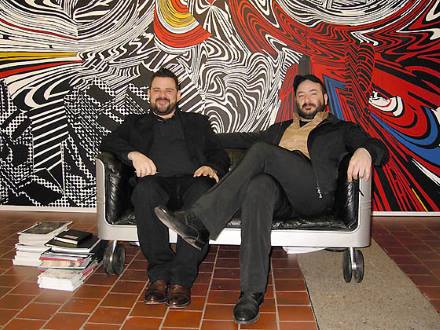 George Vamvakidis and Stathis Panagoulis of The Breeder, Athens.
Photo : via artnet.com

“The art market is basically dead right now in Athens”, said George Vamvakidis in a telephone interview. Vamvakidis is a co-founder of The Breeder, a successful gallery that specialized in Greek contemporary artists and is known on the international art fair circuit. “The state is unable to fund the arts and the private collectors, the biggest ones, choose not to support the local market. So as a result almost every single commercial gallery of our generation has closed its doors. […]”

The upshot of the crisis, according to some of the dealers, is that it has caused something of a renaissance in the country. [Artist Dimitra] Vamiali said the crisis became “an inspirational turning point for many artists”. Vamvakidis said that artists are “liberated from the forces of the market” and for this reason Athens has become something of a creative hub because of the resultant creative energy and the low cost of living. “Artists that are working under those circumstances – who have the balls to produce work that is totally unconventional”, said Vamvakidis, “are producing really brave work”.

Full article here on artnet : Greek Art Dealers Tell Us How to Run a Gallery in Athens On 60 Euros A Day, by Rozalia Jovanovic and Eileen Kinsella – July 10, 2015