End of year exhibition at Roubaix school with Eric Bourdon

END OF YEAR EXHIBITION AT THE QUINET-BERT SCHOOL

This exhibition which has been proposed until July 3, was a presentation of painting works by first grade pupils from the class of Alexandre Classiot, following the weekly interventions in visual arts of the artist Eric Bourdon.

Eric Bourdon, self-taught 28 years old painter, has had to analyse his own technique of drawing, developed for 10 years, to be able to make it communicable to first grade pupils, so that they can re-use it on their level. This transmission was done in several stages. It was initially needed, for awaking them, to lead the pupils to discover works of great well-known painters and their techniques that the children had to take back in their own style. Joan Mirό has been used then for his work on the lines and his special correspondence with the works of Eric Bourdon shown to the children. 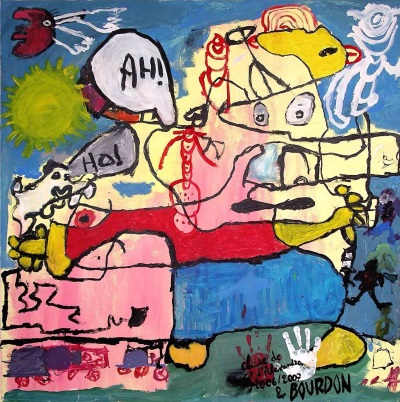 The general idea was to trace lines at random on a white sheet, to then find new characters by adding elements giving them an identity (eyes, mouth, ears, legs...). In this simple way, the children developed capacities of graphic improvisation on the basis of controlled chaos. This trick makes it possible to bypass the eternal blocking of the " white sheet ".

The true pictorial creativity became acces-sible to 6 or 7 years old children, as demonstrated by the exposed works. The various stages led the children to work in an individual way, then by groups of 3 on a large sheet, while passing by a mosaic of drawings forming a robot supporting the canvas of the painter, to come out onto a purely collective work which is the climax of the interventions since it is a true large painter canvas [1mx1m] to which each pupil took part: " The ghost frightens the giant ". A final work which shows the involvement of the children.