You are looking at the page Artist statement | Eric Bourdon, French painter on the website Eric Bourdon, French artist painter | Gallery, in the category About the artist. Artist statement of French contemporary artist painter Eric Bourdon. Creating life and meaning with found or improvised lines... The game consists in extracting from the chaos of intersecting lines the most expressive characters possible. It's like imagining fantastic creatures in the clouds or inkblots (pareidolia). Life in the infinite profusion of its forms and colors.

At the beginning, lines drawn at random in all directions jostle for space on my canvas. The game, very simple in its principles, consists in extracting from the chaos of intersecting lines some characters as expressive as possible. It's a bit like imagining fantastic creatures in the clouds ( ‘pareidolia’ ) or inkblots ( ‘Rorschach test’  ). It is also like a mathematical equation to solve, except that variables and unknowns are many, solutions numerous and determined by the sensibility of whoever defines them, and a graphical solution is only the best until we find one that exceeds its expressiveness. 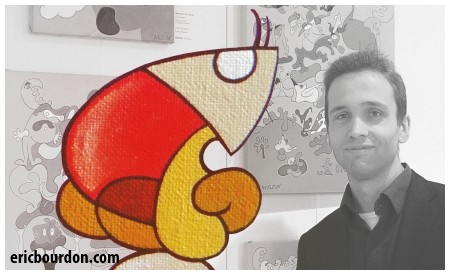 The game is not to draw a bull or bird, but a creature resembling a bull or a bird may appear here and there. However, no animal has served as a model, the creature will just have 'the look of a bull' or wings, but it will be neither bull nor bird. The features of the characters are retained only for their expressive power, without giving oneself any existing model to copy.

By taking its own path, away from reality and the world, it is thus not uncommon that the drawing sometimes crosses again the forms of one and the other... Detached from the curves and silhouettes of the world, it rebuilds them while setting its game in the imaginary.

The work of improvisation based on simple lines to get into shape, to bring to life with a technique that I only seek to improve rather than to apply, highlights the essence of improvisation. More than putting the chaos in order, it is about improving the ability to create meaning and life from a situation each time unprecedented. Through improvisational drawing, the sketch artist takes advantage of the incredible wealth that chance and accidents offer us, to realize himself as an insatiable creator - or modeler - of life in the infinite profusion of its forms and colors.